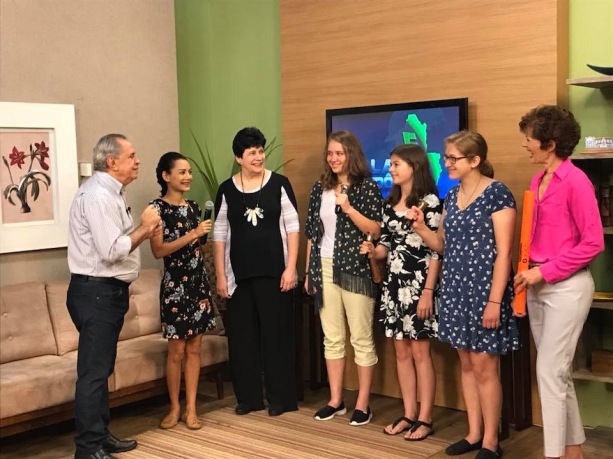 Today we are Brazilian celebrities! We had two television interviews today. The first one was for Rondônia TV.  Dr. Moorman-Stahlman and Jéssica Mayumi were interviewed live where they discussed the cultural exchange program between LVC and the Brazilian students and then Abby Stoner,  Rachel Schultz and, Robin McAnally and I played a bucket drumming piece followed by two songs on the handbells in which Dr. Moorman-Stahlman joined. We thought we were all done when another television studio asked us to have another interview. We hurriedly went to the Escola de Música Villa Lobos and had the second interview. This was followed by a lunch snack where we enjoyed “Tapioca” and wonderful fruit juice drinks. We then were joined by some students from Rio de Janeiro, some of which had been involved in our cultural exchange at LVC. We had a rehearsal at the Primeira Igreja Batista De Rondôia and then dinner (at 9:45 pm).  We had a wonderful first full day in Brazil! I will have a live link for you tomorrow! Boa Noite!